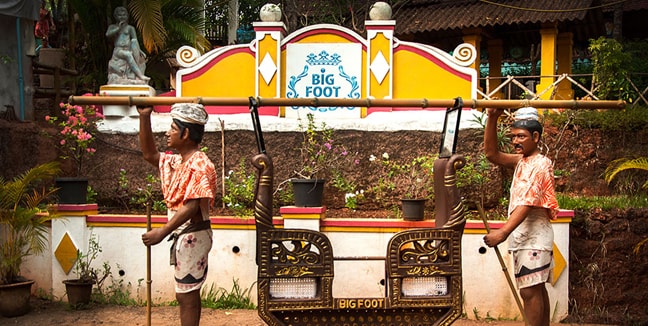 The little state of Goa, located on the western coast of India in the verdant Konkan region boasts a long and varied history. Variously ruled through the ages by Hindu and Muslim rulers as well as the more recent Portuguese colonists, the land itself has imbibed a variety of customs and traditions which blend those of all the various communities which call it home.

Goa today of course, has been greatly modernised to keep up with the ever changing times and technological progress. However, all of its history is still a large part of the culture and atmosphere of the state. If you’ve ever wondered what a Goan village would have been like a hundred years ago, wonder no more. With the setting up of ‘Ancestral Goa’ you can visit a miniature village which has been planned and executed in minute detail.

Where to Go
The Ancestral Goa theme park is located in Loutolim, a village in the south of Goa. Located about 8km from Margao, this miniature village is easily accessible by road.

When to Go
The Ancestral Goa theme Park and Bigfoot Museum are open to visitors all the days of the week from 9.00am to 6.00pm

What to See
A Welcome Entryway - The entryway and foyer have been designed to look like the gates of a castle and the foyer of an old-fashioned mansion, gracious and welcoming.
The Legendary Creator of the land of Goa - Legend has it is that Goa was created by an arrow shot by Lord Parashurama, and his statue, taking aim with his bow is one of the first sights within the compound.
Salt Pans - Traditional Goan salt pans where river and sea water was collected and allowed to evaporate, leaving behind unprocessed salt.
Coastal Treasure - The coastline of Goa was vital to the states trade and commerce. Traditional occupations included fishing and coconut husking, which are depicted here.
Rural trade-off - Those who did not make their living off the sea, made it growing rice, the staple food of Goa. The typical village house has been constructed here in miniature.
Brewing Nectar / Ambrosia - Perhaps one of the most famous occupations of Goa is the cultivation of cashew nuts, both for the nuts themselves and for the feni which is brewed from the fruit.
Fount of Life - The Boca da Vaca or “Cow’s Mouth” is a spring like many which are seen in traditional villages, often believed to have medicinal properties.

Hinterland Ethics - These sites found on the edge of villages were thanksgiving shrines for a safe journey through the forested hinterlands where travelling had to be done on foot.

From Craft to Trade - Besides farming and fishing, there were craftsmen who plied their trade in Goa, like cobblers and potters.
Rural trade trends - The rural marketplaces were not only a place to buy your groceries but also a meeting place where gossip and the news of the day were exchanged over vegetables, meat and fish.
Bairo Alto - The land of Goa is a melting pot of cultures and traditions and is one of the best examples of communal harmony with various cultures living in peace with each other and their surrounding eco-system.
Anandachem Ghor - The traditional Hindu homes of Goa, complete with the tulsi plant out front in its decorated clay pot, a symbol of purity and good health.

Casa de Dona Maria - The traditional landlord’s house in Goa, with tiled roof and altar room, the house was modelled on Portuguese architectural styles with a hint of Goan décor thrown in.
Taverna - With an abundant feni production comes the taverna, a small village bar and liquor store, still seen everywhere today.
A Escola de Musica - Music formed an integral part of Goan culture and tradition and continues to do so today. All children of affluent families were taught at least one musical instrument.

Legend of the Big Foot - A wealthy land owner used to generously give of his own monies to the less fortunate. However, unscrupulous people took advantage of his good nature and fleeced him of all his worldly goods. Seeing his generosity of spirits the gods granted him a boon. The man being humble and pure asked only for a small place to pray. The gods gave him a hot rock where he could stand on one foot and pray. The man used this rock day and night until the gods, impressed with his devotion, took him up to heaven, leaving behind his footprint on the rock with the legend that all those of pure heart would be blessed with luck.
Sant Mirabai (Sculpture) - This is the longest laterite sculpture in India, and depicts Sant Mirabai strumming her Tambori. It shows influences of the famous Gandhara school of Art.

The Verdant Patio - Many of the traditionally grown fruits and vegetables of Goa have long since been replaced with high yield varieties. This place attempts to preserve the traditional produce.
Feathered Friends - Goa is home to more than 450 species of birds and butterflies.
The Rubber Plantation - This depicts the traditional methods of tapping rubber trees as well as the making of sheets of rubber. It also makes a great place to relax in the shade of the rubber plants.
Art Gallery - Housing about 20 canvases at a time, the art gallery is a forum for the display of traditional and modernist Goan artists and has played host to a number of events and art shows.

Bigfoot Cross Museum - The museum houses photographs of 1062 crosses from around the world which have been classified into 80 categories.
A Handicraft Fair - Local artisans and craftsmen have their wares on display here, from clay pottery to lamps, cane and bamboo work visitors can shop for a variety of traditional Goan crafts.
Bal Kala / Amphitheatre - An open-air stage, the Bal Kala has hosted a number of events including the plastic drive, book releases, musical evenings, the coco’ju festival and educational programs for children.
The Artisan Habitat - A place where artists and artisans are provided with eco-friendly accommodation and a chance to give their creativity free reign.

The Big Foot Dance Floor - Shaped like a large foot, this dancefloor has been created to be a versatile venue with the ability to host a variety of functions like weddings, anniversaries, seminars, dances etc.
The entire complex has been built with the idea of allowing people a glimpse into the lives of everyday people from Goa’s rich history. Populated mostly by statues which depict the various traditional activities of Goan villagers, this is both a fun and educational experience.